We try to keep a varied selection of bikes in stock at our shop. For one reason or another a customer may want to buy a bike from an online dealer though. That’s ok. One of the main advantages to buying one of the bikes we stock in the shop is we include a comprehensive assembly procedure with each bike we sell at no additional cost. But, even if you don’t buy a bike from us, we feel you have the right to a well assembled, safe ride which won’t immediately cause you problems. This is why we offer our basic bicycle assembly from a box for $49.99. This is an assembly of a standard bicycle from a shipping box with the front wheel, handlebars, saddle,front brake, and pedals removed for shipping. We can also do a full custom assembly if the bicycle frame and all parts are shipped separately for an additional charge. 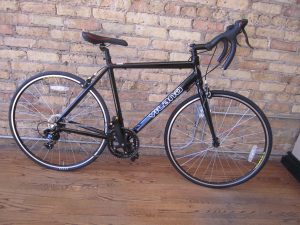 This is an example of a bike which was bought from Amazon earlier this year. The customer made an attempt to assemble it themselves before deciding it would be better to bring it into the shop and let a professional take care of it. The bike had a few issues which would have made it difficult for even an average home mechanic to assemble it into a safe and good riding bike. 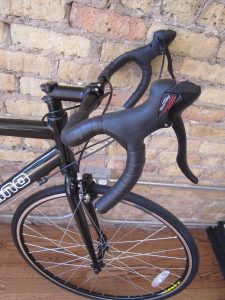 The first thing you can’t help but notice is the wonky cockpit. The brake levers had been installed very low on the drop bars.The customer tried to compensate for this by tilting the bars up at a crazy angle to try to get a comfortable grip on the controls. As you can see, this makes the bike look really funny, and the bars and levers weren’t designed to be used at such an extreme angle so this isn’t a great setup ergonomically. Also, the rear brake cable is wrapped around the steerer tube the wrong way, the front wheel is on backwards, and the handlebar tape was wrapped from top to bottom. The bar tape isn’t a huge deal, but if it were left like that, it would start to peel off prematurely. Since we wanted to get the brake levers adjusted on the bars in a good position, we just removed the bar tape and re-wrapped them from the correct direction. 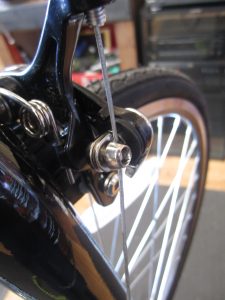 A small but important detail missed on the customers assembly was proper routing of the front brake cable. The cable should be routed through the slotted washer in the cable clamp, not right underneath the bolt head. I have seen improper cable installations like this result in the bolt head cutting the strands of cable and eventually leading to the brake cable completely failing. Not something you want to happen on a bike ridden in the streets in heavy, urban traffic. 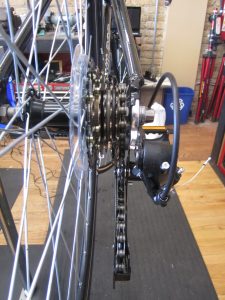 The bike was shipped with the rear derailleur attached. The box got smooshed in on one side, which resulted in the derailleur hanger being slightly bent. Without the proper tool and know how to fix it, the bike would be rideable but would never shift quite right. So we got out our alignment gauge, straightened it out,  and got the shifting perfectly adjusted. 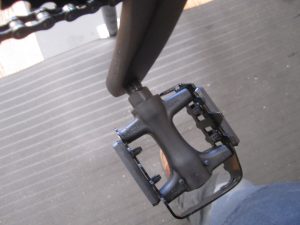 Most people don’t have waterproof grease in their home or apartment. Often times when these bikes get assembled at home, the seatpost and pedals are installed without any grease. Once again, this isn’t a safety issue, but it can cause big, expensive problems in the future when the bike needs the seat height adjusted or the pedals replaced. Also, without a pedal wrench, the customer wasn’t able to fully install the pedals. If the bike were ridden like this, the pedals would likely rip out of the cranks, stripping the threads and requiring an expensive repair to remedy. 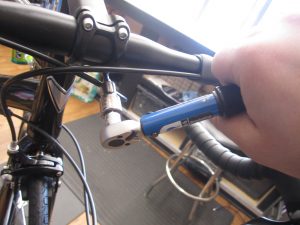 All stem bolts are properly torqued during professional assembly. This is a vital safety detail. 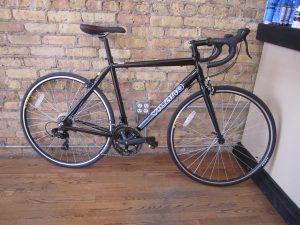 And here we are all finished. The saddle is adjusted to a good angle, and the height is adjusted for the rider. The handlebars have been re-wrapped, and the levers have been placed so they are comfortable to use from either the hoods or the drops. The bike is well adjusted and mechanically sound. It is ready to be confidently ridden on the Chicago streets without having to worry about loose parts, brake failure, or shifting issues.

You can have your new bike delivered directly to our shop to be professionally assembled and delivered. You can also have it delivered to your home and have us come out with our mobile van to assemble it for you. Just book an appointment using the Booxi button in the Service page of this website.

We have also been background-checked and verified to be a service provider on Amazon.com. You can pick our shop as an assembly option before you check out when buying a bike from their site.