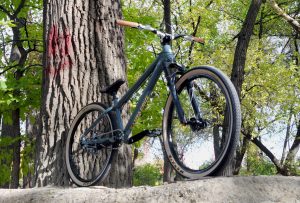 “Who mountain bikes in Chicago?” “There are no mountains here.” “This isn’t Colorado, California, Arizona, or North Carolina. Why would I get a pricey mountain bike if I live in this big city with no mountains?”

We hear things like that all the time in the shop. It gets a little frustrating because while all of those places offer amazing trails and riding, you shouldn’t just dismiss our city all together and give up on mountain biking here. Sure, you have to get a little creative within the city limits, and need to drive a bit to get to sanctioned, maintained trails with singletrack. Which is why a 26″ dirt jump bike makes a lot of sense if you live here and want to scratch your mountain bike itch more than once or twice per week. Just 1.5 miles from the front door of our shop, and soon to have an off-street bike path covering almost that entire distance along the river is The Garden- Chicago Dirt Jumps. The Garden is in the heart of the city and has something for everyone with a pump track featuring table top jumps for beginners and small, medium, and large jump lines for everyone to hone their skills. Also within the city limits, but further away from the shop on the South Side of the city is Big Marsh Bike Park. Big Marsh is much newer than the Garden, but the first phase of the park has been completed and features some great jump lines, a street section, pump track, and short singletrack loops with progressive features to help you build up your skills.

There are also skateparks in the City of Chicago where you can get creative with your riding. Wilson Skatepark and the Logan Square Skatepark in particular are fun places to get your transition on. You can also just ride around the city and find plenty of spots to session and mess around with like Brandon Semenuk did when he visited Chicago a few years ago.

You would be hard pressed to find a better 26″ dirt jump bike than the Santa Cruz Jackal. The Jackal is available as a frame-only from Santa Cruz for $745, and then you custom build the bike with your choice of parts from there.  Here is one we just built up for a customer: 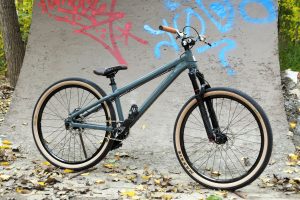 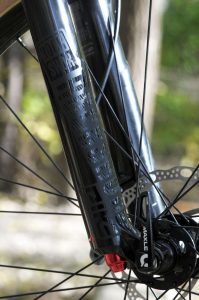 The highlight of the build is the Rockshox Pike DJ fork. In our opinion, this is the nicest 26″ dirt jump specific fork on the market. It’s got 35mm chassis for plenty of strength and support, a custom tuned Charger Damper to smooth out rough landings, and a solo airspring with built in bottom-out resistance to give the fork good, smooth progression while also keeping it from bottoming out after a big drop. The fork came with an extra set of stickers for the lowers, so we removed the traditional white, black, and red ones and replaced them with black-on-black to match the subdued color sceme of the rest of the bike. 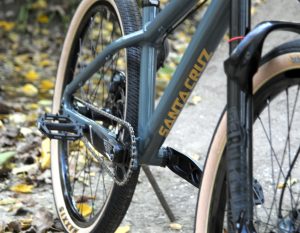 The Jackal comes with sliding rear dropouts with an integrated derailleur hanger, so you can easily run the bike with or without gears. We opted to go single-speed on this build. The frame has a 73mm English-threaded bottom bracket shell with ISCG tabs. We decided to use Truvativ Descendant cranks with a Dub spindle and bottom bracket to give the cranks some stiffness. The 32 tooth chainring pulls a 17 tooth Surly cog on the back wheel. 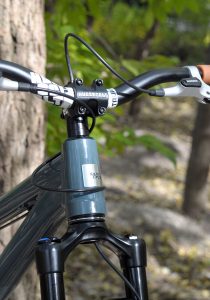 We installed Truvativ Hussefelt bars, stem, and seatpost on the bike. This gave us the strength and support we were looking for without breaking the bank. The bars are finished with ODI x Vans grips in natural rubber color. The 90’s skateboarder in us appreciates these grips. There was a bit of debate about what to do with the brakes on this bike. At first, we were just going to build the bike with only one basic brake on the rear, which would be totally suitable for park riding. But then we talked it over with the customer and decided to run both brakes, since the bike would be ridden in busy urban streets as well as being used at the park. The customer already had a NOS pair of Shimano XT levers, so we just got a simple set of Shimano calipers to mate with them. We left plenty of extra hose on the rear brake, and ran the front brake hose through the topcap and steerer tube to allow the bars to spin around freely, either for tricks or in case of bike-bails so the bars can spin around without kinking or breaking the hoses. 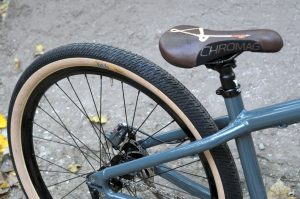 We used Standard Issue wheels from Atomlab on the build. Again, we wanted to prioritize durability without breaking the bank. These are great wheels, but we found the stickers on the rims to be a bit much, so we removed those also to preserve the clean look of the bike. We topped off the wheels with Maxxis DTS tires in 26″x2.1″ in skinwall. We think these tires look great on this bike, and we have had nothing but good luck with Maxxis mountain bike tires. The last fun detail on the bike is the Chromag Overture saddle in Rawhide finish.

We hope the owner has as much fun riding this bike as we did building it!

We try to keep a varied selection of bikes in stock at our shop. For one reason or another a customer may want to buy a bike from an online dealer though. That's ok. One of the main advantages to...